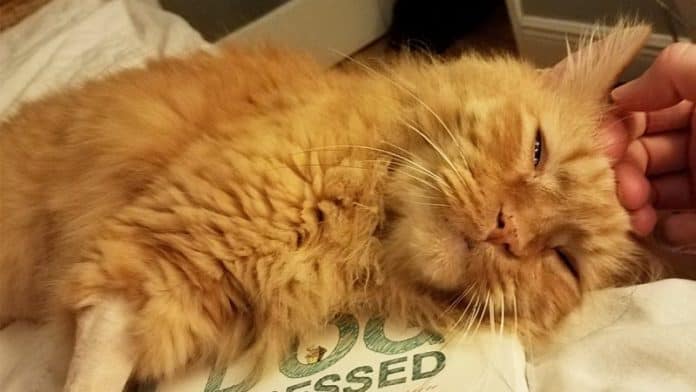 Gallstones are commonly made up of calcium or some other secreted stuffs that form into small stone-like structures in the cat’s body. Furthermore, gallstones in cats is a medical condition, which may result from the stone formation in the gallbladder. The stones in the bile ducts or the gallbladder might be visible through an x-ray, or they might not. Except that there are some serious symptoms, surgical procedure isn’t recommendable for gallstones. Get to learn more about gallstones –its causes, symptoms, prognosis, and treatments –give this article a read!

Gallstones in Cats: What is this feline condition?

Even though gallstones in cats are rare to happen, the existence of large stones is one medical emergency that you should not ignore easily. This is mainly because these stones may block the bile from being released and may cause problems with the kidneys, digestive system, and liver.

Furthermore, the gallbladder of the cat is a small, balloon-shaped organ, which is located in the liver lobes. Its main function is the releasing of the bile in the digestive system, in order to aid in the food digestion. Moreover, gallstones in cats are commonly made of calcium carbonate that is mixed with some other secreted minerals and substance.

Gallstones in cats may actually be divided into two different types that are also categorized depending on the minerals, which combine with the calcium carbonate to form them:

There are a number of reasons as to why gallstones in cats happens in cats. These causes may include the following:

The vet may need the complete medical history of the cat. This may include any gallstone history, a thorough list of all the systems of the cat, as well as an estimated date when the symptoms first started. Due to the fact that a lot of the symptoms of gallstones are also existent with more severe illnesses like gallbladder inflammation, liver disease, pancreatitis, inflammation and bile duct, these conditions may need to be excluded.

A CBC, urinalysis, and biochemical profile may be required by the vet. These lab exams may look for the possible presence of an infection, which might be causing the gallstones, as well as help in ruling out some other illnesses. Since most of the gallstones do not contain sufficient minerals to get detected on a radiograph, x-rays are seldom done, yet might be needed if the vet suspects some other condition, which is identifiable through an x-ray.

Moreover, ultrasound imaging may also be done of the abdominal area of the cat. Further, the ultrasound may look for the existence of gallstones in cats, liver inflammation, thickening of the gallbladder walls, blockage of the bile duct, as well as an enormous bile duct swathe. Additionally, an ultrasound may also detect gallstones, which are two millimeters larger.

The small gallstones, which aren’t causing symptoms or digestive issues might not need whatever treatments. These gallstones are commonly present during an ultrasound for some other condition, just like pregnancy.

The vet may also prescribe that the cat should receive intravenous supplements, other than medications. Vitamin K1 may be given, in order to treat jaundice, as well as vitamin E to help in reducing inflammation to the gallbladder and liver.