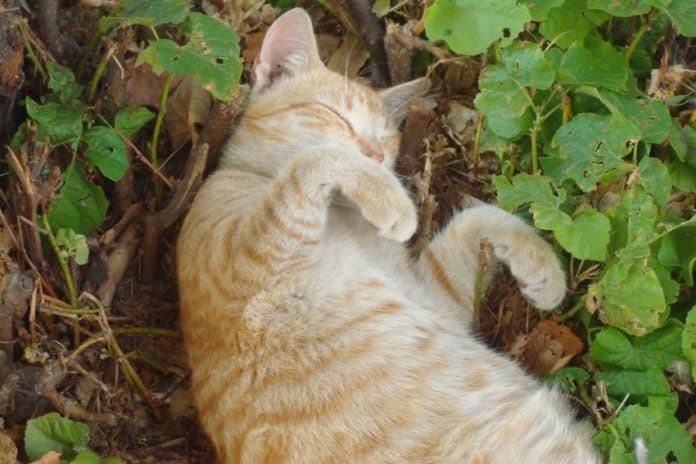 Narcolepsy and cataplexy in cats –these are disorders that affect the way an animal operates physically, and are unusual yet well-studied nervous system disorders.

Narcolepsy is characterized by a lack of energy, short loss of consciousness, and excessive day sleepiness. On the other hand, cataplexy is the same as narcolepsy, wherein the episodes are brief, reversible, and spontaneous.

Just because your cat is unresponsive or loses balance while sleeping doesn’t necessarily mean you’ve got a narcoleptic cat on your hands.

In this article, we will discuss some more interesting facts about narcolepsy and cataplexy in cats including its causes, symptoms, prognosis, and treatments.

What are Narcolepsy and Cataplexy in Cats?

Narcolepsy and cataplexy are unusual conditions in cats yet there are many reported cases.

A cat that has narcolepsy might suddenly fall into a deep sleep while it is standing, eating, or sitting, causing the cat to fall over or sway.

Additionally, a cat that’s narcoleptic may also fall asleep while it is climbing. This may cause the cat to fall to the ground and can be, as you can imagine, very dangerous to the health and wellbeing of the cat.

A cat that experiences a cataplectic episode, on the other hand, may excitedly run around and suddenly collapse, not able to move.

They may still look around, whine or meow, and be otherwise fully conscious. The conditions aren’t commonly life-threatening or awfully worrisome and may be cured with medication once diagnosed by the vet.

Moreover, narcolepsy is a chronic brain condition, which is present in different kinds of animals, even humans.

This may result from the inability of the brain to normally, as well as sufficiently control the wake-sleep cycle of the brain. This may cause the narcoleptic to experience morning tiredness and some episodes of abruptly falling into a deep sleep, frequently at inopportune times.

Cataplexy is the same brain disorder, which may cause a loss of control in the muscle and commonly results in collapsing.

This is different than narcolepsy, nonetheless, since, during a cataplectic incidence, the feline stays fully conscious, yet is not able to move. The episodes frequently occur immediately after or during moments of great excitement.

The causes of narcolepsy and cataplexy aren’t known definitively.

Also, the conditions unusually seem to run hereditarily; most of the cases seem to be relatively sporadic, happening with no known history of the brain condition.

In humans, different studies have found a link between the low levels of hypocretin neurotransmitters and narcolepsy. The said neurotransmitter is what promotes the wakefulness of the cat.

Moreover, in humans, cataplexy may seem to be due to a low number of brain cells, which produce hypocretin. Researchers think that the low level of cells is possibly due to an immune deficiency.

Because it’s so rare, narcolepsy and cataplexy in cats may be due to a traumatic injury in the brain. These are so rare in cats, where the vet research community hasn’t devoted so many resources to studying the illness in cats or compare it to other animal conditions.

Most of the knowledge with regards to these conditions come from the studies that are done in human and in large animals.

Narcolepsy may be much more difficult to diagnose in cats, rather than in some other animals due to the natural tendency of cats to sleep from 13 to 18 hours every 24 hours.

Further, the pet owner will need to repeatedly observe the symptoms listed next to cause enough concern to make a vet appointment:

In the event that the pet owner recognizes the symptoms above and makes an appointment, the vet may likely do the following things to help the owner in making an accurate prognosis:

Treatments for a Narcoleptic Cat

Even though narcolepsy and cataplexy might be somewhat troubling to you and your cat, they don’t have to be painful or life-threatening conditions.

In addition, depending on the condition of the cat and the treatment level you’re willing to take on, the vet might simply suggest that you simply keep a close eye on the cat. This will help to determine whether the symptoms are becoming progressively worse or not.

They might also suggest this observation while prescribing antidepressant medication, which may affect the brain chemistry of the cat, in order to combat the severity and frequency of the attacks.

Check out these facts about snoring in cats for more sleep-related issues.