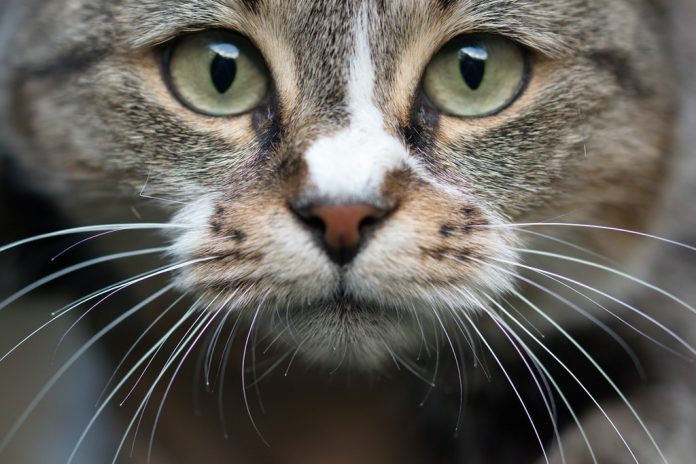 What are nasal polyps in cats?

While the condition may sound scary and unpleasant, there are treatments available, and most cats recover well.

Feline nasal polyps are benign pink growths that appear from the mucus membranes or the moist tissues that line the nose.

It is believed that various congenital processes contribute to the problem.

Nasal polyps (or nasopharyngeal) are most commonly found in younger cats under two years of age.

They are often accompanied by difficulty breathing while active or when sleeping.

As the polyps grow in size, the cat can develop similar symptoms to other cat respiratory diseases like Pleural Effusion. False diagnosis can occur, so if you have concerns, double-check with your vet.

Cats can be prescribed antibiotic treatment for a respiratory disease that will not help nasal polyps.

Other cat nose conditions include:

Polyps are noncancerous masses that are unlikely to spread but may impact the cat’s respiratory system.

Vets use two different terms in describing the pink growths in the cats’ noses – nasopharyngeal polyps and nasal polyps.

Nasal polyps are when they grow in the moist mucus membranes inside the nose.

If the growth spreads from the nasal cavity through the soft palate, back of the throat, or the middle ear, the growth is known as a nasopharyngeal polyp.

Veterinarians disagree on what causes the pink growth in the nose of cats.

Some vets also think that both nasopharyngeal and nasal polyps are congenital, genetic mutation passed from the parent to its offspring.

They base this theory on the link between polyp growth and the common tumor.

It’s also a well-known fact that tumors, especially cancerous ones, are frequently found in similar genetic makeup and bloodline.

Other vets think that the nasopharyngeal and nasal polyps are a secondary response to a virus in the respiratory system, which causes inflammation to the cat’s nasal cells.

Common viruses linked with these growths include:

Many cats have rapid development of nose polyps after having these respiratory illnesses.

Common symptoms of nasal polyps in cats may include the following:

In bad cases, nasopharyngeal polyps may cause symptoms linked with Horner’s Syndrome.

The vet may start the diagnostic process with an exam of the cat’s mouth, ears, and nose via the use of an otoscope.

Because the soft palate frequently hides the pink growths, a CT scan or X-ray of the skull may be required.

The cat might be anesthetized for the exam to keep it calm, reduce stress, and allow for a comprehensive look.

Other tests likely to be performed include:

The treatment option for nasal polyps in cats is surgery.

The whole mass can’t always be removed because of the location of the polyps.

This surgical process of de-bulking is one way forward. The vet may remove as much mass as possible in a surgical manner while leaving some.

Vets use this kind of surgery to prevent damage to nerves, openings, and auditory organs in the respiratory structures.

The de-bulking surgery isn’t a treatment for the polyps, and some other surgery is frequently necessary.

Also, the vet might recommend corticosteroids or some other anti-inflammatory medications to slow the possible growth.

Even though the reappearance of nasal polyps in cats is common, most cats do so well after the surgery, and the quality of life they have is good.