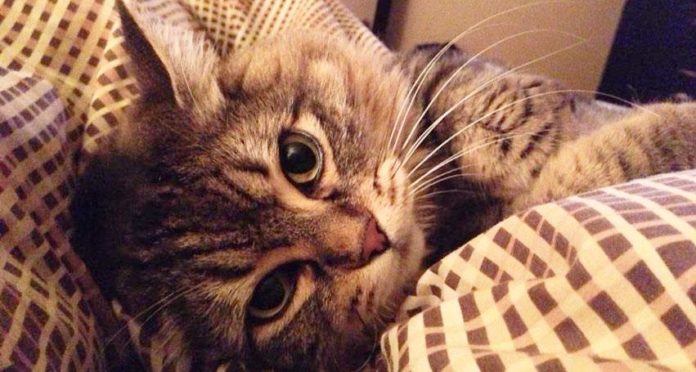 With the indecisive references and unique ways of cats, it is not already a secret that they might be a bit weird sometimes. However, sometimes, that strange thing that your cat do is actually a medical condition too. Let’s say, for example, feline hyperesthesia syndrome or what they sometimes call as the twitch-skin syndrome, rolling-skin syndrome, or rippling-skin syndrome, among others. Read on though this article to learn more about this condition.

Feline Hyperesthesia Syndrome: What is this condition?

The FHS or feline hyperesthesia syndrome is an obscure cat condition that results from an intense licking or biting of the tail, back, and pelvic limbs. The neuromuscular and nervous systems, together with the skin are being affected but he condition. Furthermore, various symptoms might happen any age and may develop in various breeds of cats. The purebreds like the Himalayans, Burmese, Abyssinians, and Siamese seem to be subject to develop the condition.

Moreover, the condition is also referred to as the rolling skin disease. The cause of this cat condition is not that known yet, but some of the experts describe it as a neurotransmitter malfunction in the brain, during the periods of anxiety. It isn’t common as a condition, but if the cat experiences this condition, it is a very terrifying happenstance for everyone at home.

The condition may actually cause a cat to feel extremely sensitive to being touched. The different parts of the body that are most vulnerable are the tail and the spine. Furthermore, the FHS is an enormously rare condition. This cat condition may affect cats of any age, even though it is more often seen in the adult cats, whatever cat breed or mixed breed may be susceptible to the condition.

As what we always say, FHS is a rare condition and the exact cause of it is unknown. It might develop to a causal behavioural problem, neurotic problem, or a seizure condition. The hyperactive or nervous cats are thought to be at a greater risk. Environmental stress might also trigger the condition.

Furthermore, it is ventured as well, that there might be some factors that may contribute to the symptoms that come with feline hyperesthesia syndrome.

In cats with hyperesthesia, the skin at the back ripples from the shoulders all throughout the tail, and sometimes goes up the tail up to the tip. Further, the drive obviously visible in some cats, yet much harder to see in the others.

What a lot of pet owners notice, rather is the cat suddenly turning and jumping towards the tail, just like something in there is bothering it. This particular circumstance may also occur during sleep. Furthermore, the cat may also try licking or biting at that specific area. The cats with feline hyperesthesia syndrome may also have twitches and spasms, and their tail twitches too.

In case a cat has this particular syndrome, it may object to have points along its back or spine touched. It may chase its tail, turn toward its tail, cry out, bite at itself, jump, run, or hiss. Further, it might even appear to be hallucinating, following movement of things that aren’t there. Additionally, its pupils might also be dilated during these times.

In austere cases of the condition, cats may self-mutilate by chewing, licking, biting, and pulling out its hair. These poor cats suffer not just hair loss, but often austere secondary infections and skin lesions from trying to get a relief from any uncomfortable sensations they experience.

Due to the fact that there is no known discrete physical cause for the condition, the prognosis of it is hard and is mainly based on the characteristic history of the cat, as well as its exclusion of some other diseases, which cause the same symptoms. There’s no certain test that may provide a conclusive diagnosis.

Some other diagnoses, which may exclude the FHS include various skin conditions, and conditions in the forebrain. These are what cause seizures or behavioral changes. MRI and various imaging processes may help in pinpointing such kind of neurological problem.

As of now, there is no particular medical treatment or cure available for feline hyperesthesia syndrome. Nevertheless, some pet medications have been used in the administration, in order to suppress the episodes, as well as the behaviour modification has already proved beneficial in at least reducing the problems in some of the cat population.

Nonetheless, the condition is commonly controlled through the administration of anti-seizure, antidepressant, or antianxiety medications. Various environmental factors must also be addressed via the reduction of the exposure of the cat to anxiety elicits. Providing a more stirring cat exposure to various anxiety triggers, as well as positive stimulation may also benefit the cat itself.

If you happen to observe that you cat displays a behavioural change, which looks the same as the feline hyperesthesia syndrome, contact your vet. A detailed examination and full workups may be necessary to be done.