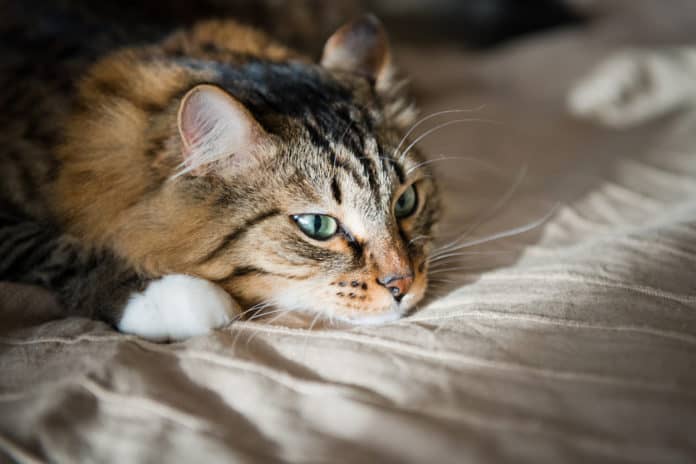 The term papillomatosis is actually used in describing a benign tumor that is found on the surface of the skin. This is mainly due to a virus called papillomavirus. It is often characterized by a black growth that is raised and is wart-like, which has an open pore in its central surface. In this article, we will be discussing about what is wart virus in cats, as well as its causes, symptoms, prognosis and treatment. If you want to learn about these, give this article a read.

What is Wart Virus in Cats?

While warts are not that life threatening on their right, the vulnerability with just leaving the wart virus in cats untreated is that –the tumors or growths may evolve into some kind of cancerous tumors over the period of time.

Furthermore, the growth of wart virus in cats is a feline condition, wherein the raised tumors of tissue happen in numerous areas on the cat. These particular growths are commonly non-cancerous, or benign, and may happen in any physical location on the pet. Further, the most common sites you might find papillomatosis tumors could be around the mouth, eyes, as well as in the nose. This is because of the increased humidity and probability for transmission of the viral cells to the said areas.

Due to the fact that wart virus in cats is a phrase that is used in describing several sporadic tumors in cats, there isn’t a single recognized cause of the condition. Further, there are some viruses, which cause the warts formation, as well as several identified causes of the infection with impulsive development of warts and papillomavirus.

Papillomavirus or wart virus in cats commonly presents with the raised tumors and a range of some other related signs and symptoms. Below are some of the symptoms that you need to watch out for, if you happen to suspect papillomatosis, or wart virus in the cat:

Just like with a lot of conditions, it’ll be significant to provide the vet with a documentation about the cat’s growths or warts. The information like the date of the wart’s first appearance, the wart’s growth rate, as well as any resulting infection, inflammation, bleeding or some other associated conditions  may be important in eliminating the same conditions.

Moreover, the veterinarian might also suggest a biopsy of a part or all of the affected area. This may not just identify or eliminate the possibility for cancer in the cat, yet might eliminate the tumor and prevent any future infection, spread, or associated conditions as well. This may be specifically beneficial for warts or lesions, which are intrusive with the day-to-day life of the cat, just like those all over the mouth or lips.

There are various treatments for wart virus in cats, which the veterinarian might choose from in treating the condition.

In some instances, the surgical procedure of removing the wart virus in cats, as well as the surrounding tissues might be the best course of treatment for the feline. The vet might take this particular course of action in the situations wherein the wart is thought of being cancerous or may not respond well to medications or freezing. When getting rid of the tumor through surgery, the vet might perform some further tests on the tissues removed, in order to make sure clean margins that might indicate that all the infected tissues has already been removed.

In case the diagnosis of wart virus is benign, the veterinarian might choose to just freeze the warts to encourage the tumor to fall off or reduce its size. Freezing these warts in different sensitive areas on the cat may help in alleviating the symptoms, like lethargy, the loss of appetite, or overall discomfort. Further, freezing might be a worthwhile alternative as well to surgical processes that might cause noteworthy damage to the surrounding tissues.

There are different kinds of antiviral, anti-inflammatory, or antifungal medications, which the vet might prescribe. The precise kind of medication that is used may depend on the biopsy results or some other tests done during the first veterinary visit and following diagnostic measures.