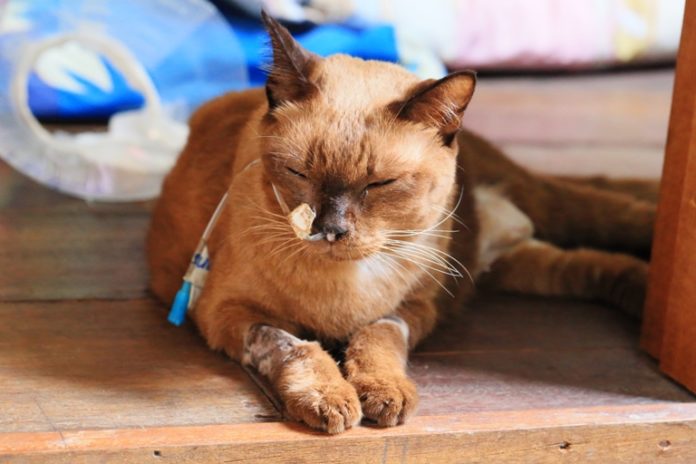 Lymphoma is a kind of cancer, which comes mainly from the lymphocyte cells. This is a kind of white blood cell that plays an important and integral role in the defenses of the body, especially in the immunity. Lymphoma affects people, but animals can be affected too. Lymphoma in cats, for instance, is a common feline illness,

There are two main forms of lymphocytes, the T and B cells. Lymphoma might involve neoplastic proliferation of the B or T, or the non-T or non-B lymphocytes, happening mainly in the bone marrow, visceral organs and lymph nodes.

Furthermore, lymphoma is also found to be responsible for about 90% of the blood cancer cases. And may account for over 33% of all the tumors in cats. Furthermore, this is also the most common cause of hypercalcemia in various cats.

The occurrence of the lymphoma in cats is actually believed to have an association with the exposure of cat to FeLV or Feline Leukemia Virus, as well as the FIV or Feline Immunodeficiency Virus. Cats, which have already been infected with either of the two viruses have an importantly higher rate of lymphomas, rather than the overall cat population.

Forms and Symptoms of Lymphoma in Cats

This mainly occurs on the kidneys of the cat.

This may occur on any organs or body parts of the cat.

This mainly occurs on the lymph nodes of the cat.

This mainly occurs on the gastrointestinal tract, liver, and abdomen of the cat.

This mainly occurs on the spaces in between the pleural lungs or sacs of the cat.

Prognosis of Lymphoma in Cats

You might need to give your vet a precise history of the cat’s health, as well as the onset of any symptoms. Further, the history and the details you give might give the vet clues in which organs are the ones that are mainly affected. Getting to know a starting point might make the prognosis much easier to determine. After the initial history has already been acquired, the vet may perform a thorough physical examination on the cat. Routine lab testing may include a urinalysis, biochemistry profile, and complete blood count.

Additionally, biochemistry might show an unusually high levels of creatinine, liver enzymes, calcium, and serum urea nitrogen. Further, the urinalysis might also reveal the unusually high protein and pigment bilirubin levels in the urine. The affected cats might also get tested for the FeLV –that is frequently in association with the lymphoma in cats. Vets might also use some diagnostic imaging, in order to search for the tumor/s. Additionally, conducting X-rays of various parts of the cat’s body, especially the areas, which appear to be affected. A bone marrow biopsy of the cat may help in ratifying the prognosis decisively.

The treatment for lymphoma in cats is highly unlikely and there’s no available treatment yet to treat the condition. The main goal is to improve the quality of life for the cats for as long as it is possible. Chemotherapy, as well as radiotherapy may be beneficial, yet you will need some consultation to a vet oncologist, in order to determine if the cat is a good candidate for this kind of therapy. Furthermore, it may depend on the stage of the condition, the cat’s age, as well as its overall well-being, among some other considerations.

Then again, varying on the stage and the type of the condition, surgical operation might be essential to some patients. This might be a feasible solution for some of the forms of intestinal obstructions, as well as for the removal of the masses. A particular surgical incision might also allow the vet to gather some specimen of the tumor for some lab evaluation.

Even though their is no treatment available for the condition yet, there are some resolutions in some cases. You might provide an extra care for the betterment of the quality of life of your cat. It is so important to monitor its water and food intake closely, while it is in its recovery stage. The diagnosis of the condition is highly variable and varies on the first treatment responseanatomic form of the tumor, tumor burden, and FeLV status.