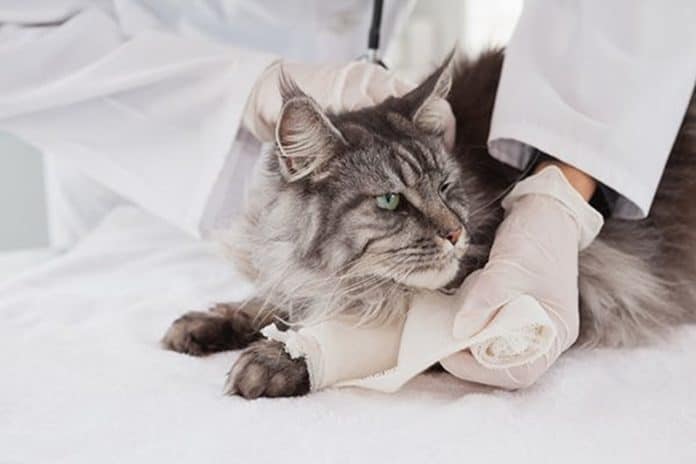 Patellar luxation or kneecap dislocation in cats happens when the kneecap of the cat is dislocated from the normal anatomic position in the femur. In case the kneecap is dislocated from the thigh bone groove, it may just be returned to its normal position when the quadriceps muscles in the hind legs of the cat lengthen and relax. The cat may feel pain as the kneecap slides out of the ridges of the thigh bone. However, they don’t feel any discomfort or pain when the kneecap has already come to rest on its normal position. Get to learn more about this feline condition – give this article a read.

Kneecap Dislocation in Cats: What is this feline condition?

In the vet world, kneecap dislocation in cats is known as feline luxating patella. The patella is, of course, the medical term for kneecap and luxation means to dislocate. A luxating patella will cause the feline to display an unusual gait, as the knee joint cannot function as it would normally. Kneecap dislocation can be caused by a variety of reason that may or may not require immediate medical addition, which is why it is of the utmost importance for a veterinary professional to be consulted when signs are first noted.

When your cat engages in physical activity and suddenly begins to limp, your feline could have suffered a kneecap dislocation. The knee, or stifle, of a cat has the identical structure of a human knee. The leg’s long bone (the femur) and two short bones (the tibia and fibula) are connected together with tendons to form the knee, as well as muscle to provide hinge movement to the leg. The kneecap, or patella, protects the knee and is housed in a groove known as the trochlear groove. When the kneecap dislocates, it means that the kneecap structure has “popped out” of the trochlear groove.

Lateral Luxation –The lateral luxation of the patella is the term used when the cat holds its leg in an inward manner, towards its body.

Medial Luxation –The medial luxation of the patella is the term that is used when the cat holds its leg in an outward manner, from its body.

The kneecap dislocation in cats may be due to one of the below reasons:

A kneecap dislocation following a traumatic event, such as a hit-by-car incident, is usually caused by an injury to the hip, leg, or knee itself. Injury or trauma related kneecap dislocation is normally just present in one of the hind legs and can often be reversed with surgical procedures. Hereditary or congenital kneecap dislocation, however, is an inherited mutation of the skeletal system, often affecting both hind limbs. The condition is present in the feline’s DNA, passed down from one or both parents to the offspring. Inherited kneecap dislocation can come and go, or become a permanent luxation over time.

Kneecap dislocation in cats will cause what veterinarians call mechanical lameness. The kneecap is causing an abnormal pull on the leg bones of the cat, mechanically inhibiting her from moving the leg in proper form. Mechanical lameness differentiates from standard lameness, as it does not cause the feline pain. Kneecap dislocation in cats will cause the feline to hold the affected hind leg abnormally, causing her to walk with a limp. Over time, affected cats have learned how to pop the kneecap back into place with a couple kicks of the leg, but this action will eventually damage the stifle structures and make the issue worse over time.

Diagnosis of kneecap dislocation in cats is fairly simple, as patellar luxation is initially diagnosed through direct palpation of the luxated patella. In other words, the veterinarian will use his/her hands to feel the kneecap pop in and out of place. Discussing your feline’s at-home symptoms and behavior, paired with a review of her medical history, will help confirm the diagnosis. To complete the diagnosis, the veterinarian will ask to have x-rays taken of the affected legs, which will completely confirm the diagnosis as well as indicate the extent of the problem.

Medical treatment for kneecap dislocation has very little effectiveness; surgery is the preferred treatment of choice for severe cases. Surgery can correct both the affected structures and the movement of the kneecap itself. The kneecap may be fastened on the outside of the bone to prevent it from sliding towards the inside. Alternatively, the groove of the thigh bone may be deepened so that it can better hold the kneecap.

It is important that pet owners are aware that there is a high possibility of recurrence (48 percent), although the dislocation will be considerably less severe than the original incidence. Because kneecap dislocation is genetically inherited, the breeding of affected cats is highly discouraged.