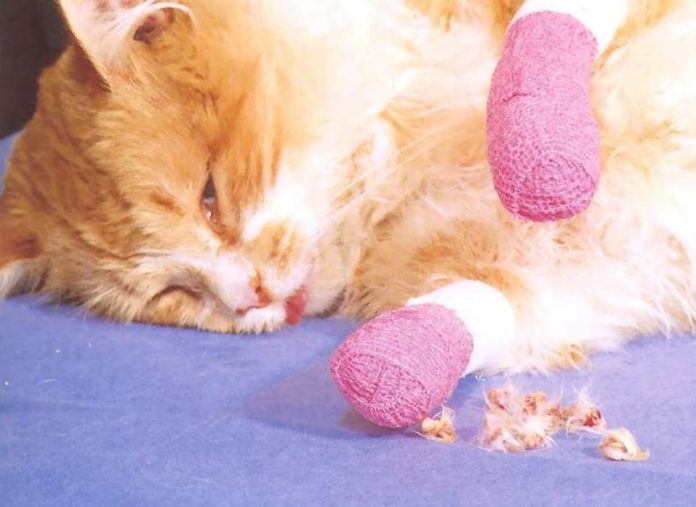 There are several subjects that are in relation to cat ownership that are as ardently debated as the declawing. There are actually hotly arguments on each sides of the issue, with some vets being so resolutely against declawing in cats. They even refuse in performing such procedure. In the United Kingdom, declawing in cats is actually illegal, and a lot of some other countries in the Europe and US, which are considering the legislation in banning the procedure itself.

Most of the people on the side of anti-declawing are there since they consider that the procedure is cruel. However, ethics aren’t just he reasons why cat owners must think hair and long before proceed with the declawing of their cats. In some of the cases, the procedure is known to cause some negative long-lasting side effects. Though most of the pet owners do not take decision in declawing their cats in light manner, they need to do some thorough research into these side effects before they make an irrevocable decision.

Declawing in Cats: Possible Side Effects

Here are three of the most common negative side effects of declawing in cats:

Professionals suggest that a pet owner needs to be well aware of the negative side effects that are usually the result if a below par performed procedure of declawing. The poor surgical procedures are actually responsible for most of the negative after effects that are seen after the declawing in cats take place. In case a surgeon removes too much or too little, or is careless in closing the surgical area, the healing process might not go smoothly and may lead to long-lasting complications.

Every time there is a surgical procedure, infection is always a possibility. It is recommendable that vets prescribe some antibiotics, after a procedure of declawing. This is to mitigate the chances of the infection. Regardless of how well you are cleaning it or how it is bandaged, we are still talking about cat’s foot. The cat will still walk on the floor. It is just appropriate to use some antibiotics after the operation to help in the healing process, or at least enable the healing with no harm from infection.

Moreover, professionals also warn that owners must keep an eye out for any signs of any infection that comes after a declawing procedure. This is since the infections, which go unrestrained may be too serious. There are some cases wherein the infection gets rooted in the bone or travels all throughout the body. The treatments for these kinds of complications may include additional surgical operations, aggressive antibiotic therapies, and hospitalization.

Refusal to Using the Litter Box.

After declawing, a cat might refuse to relieve itself in the litter box. There might be some reasons for this particular behavior. The first one is, that the cat has wounds on its feet. When the cat use the litter box when defecating, they have the tendency to dig, or cover up their own leavings. In case a cat litter goes into these wounds, it hurts. Therefore a cat might avoid going into the litter box, discerning their feet might hurt less when they defecate somewhere else.

In order to reduce the risk of the litter box getting stuck on its incisions, some people switch to the paper litter, right after the procedure of declawing. However this might backfire. When a paper litter is not what the cat’s accustomed to, it may choose to go somewhere else, as it does not recognize that the paper litter is thought to take some place of its regular litter.

One of the alternatives to declawing in cats is a tendonectomy. During this procedure, the vet severs the tendons, which allow a cat to extend its claws. This procedure is primarily less invasive than a real declaw. However, professionals do not recommend this particular procedure, as it might lead to more long-term problems than in declawing. Scratching is an innate behavior of cats, and they still go through the motions when they do not have their claws with them. However, with tendonectomy, cats might not be able to scratch physically.

More significantly, they also have no way to wear down their own claws. This means that the owners need to be thorough about clipping the claws, lest they keep on growing and grow into paw pads. They may also get thick and kind of gnarly and curly. This is mainly because when cats are scratching properly, the outer layer of their claw flakes off. In case they cannot scratch, that particular natural process cannot happen. Furthermore, the claws are not appropriately maintained, following a tendonectomy, the pet owners may deal with some issues like pain, lameness, and some behavioral changes. This is just like with the failed declawing.

There are actually some other alternatives to declawing in cats, which do not involve any surgical operations. One of the most famous is the plastic claw caps. You may need to catch the cat and cap each claw individual. This needs the cat to be cooperative, so that the process works. Some training methods may also be used in redirecting the cat’s scratching to satisfactory items. Lastly, keep the nails of your cat blunt and short by trimming them every week. lsd