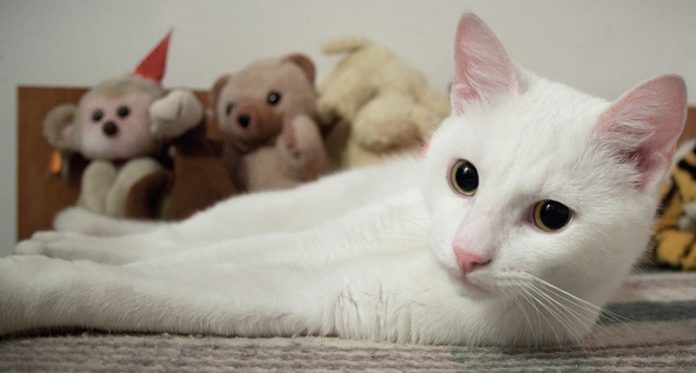 Loss of hearing or deafness in cats may be classified as either a partial or complete hearing loss. In case the cat is deaf at birth, it’ll be ostensible to you when the cat’s still at a very young age. Furthermore, cats, which have blue irises and white hair appear to be specifically susceptible to congenital deafness. Read on to this article to learn more about deafness in cats.

Deafness in Cats: What is this feline condition?

Deafness, as we know, is the inability to hear sounds. Cats may experience partial or total deafness in one or even both ears. Further, the ear is made up of a lot of parts, which receive, as well as transmit sounds. When one or more of these ear structures, just like the auditory nerve or ear drum, aren’t able to work properly, hearing loss or deafness may occur. Moreover, the incapacity to hear may be congenital. This means that it happens at birth.

Some breeds like Angoras, Ragdolls, and Persian cats are at a much higher risk of the congenital deafness. Furthermore, it may also be acquired –meaning, it is developed later in life because of factors like toxicity, trauma, or disease. Deafness, by itself isn’t life-threatening. However, the underlying cause of it may be lethal. In case a cat is showing signs of deafness or hearing loss, consult a vet immediately, in order to determine the cause.

A lot of different causes of deafness in cats exist. It may be in connection to some other disorder or disease, or be due to trauma or some other issues. The common causes of the condition include the following:

The main sign and symptoms of deafness in cat is the lack of response to sound. This may often be hard to detect, most especially if the hearing loss is gradual or only happens in just one ear. In the cats with congenital deafness, symptoms are commonly apparent so early in life, even within the initial weeks.

In case you observe the symptoms of deafness in cats, consult a vet immediately. Even though deafness is frequently not treatable, a lot of the conditions, which cause deafness may be treated when caught early. This is essential in reducing the amount of ear damage. Further, the veterinarian may need to deliberate the cat’s medical history, including the recent traumas, medical treatments, or some other causes of deafness, which might be appropriate to the cat. Make sure to prepare in discussing the symptoms you may have observed, as well as the time frame wherein they have been happening.

Furthermore, the veterinarian may also perform a thorough physical examination of the cat and its ears. They might also use an X-ray or some other imaging to look at the structures of the ear, as well as identify any existing masses or some other issues. A sensitivity examination might be done in determining the degree of the deafness.

The treatment of deafness in cats will be contingent on the kind of deafness they’re suffering from, as well as its cause. The congenital deafness and a lot other causes of nerve deafness are terminal, and the incapacity to hear might be permanent. Furthermore, the causes of a lot other types of conductive deafness are curable. The veterinarian may treat the cause that may restore hearing, as well as prevent total deafness. Even with the proper medical response, the cat’s hearing loss might still be permanent.

The treatment options may include the following:

In order to treat ear mites, which are causing the deafness, the vet will systematically clean the ear. This task requires a professional, in order to prevent additional damage. They’ll also treat the mites using a prescription drop.

The bacterial infections, which cause deafness in cats may be treated using an antibiotic. This kind of medication will work in kill off the bacteria that cause the infection. Without this bacteria causing issues, the inflammation and some other issues will vanish and the hearing might totally or partially be restored.